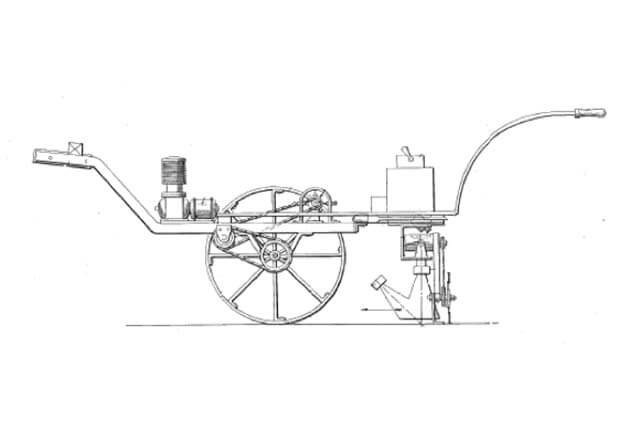 In recent years, Active Optical Sensors (AOS) have increased in popularity as a tool for rapid assessment of pasture/crop canopies, namely for quantifying the nutritional requirements of crops as an objective biomass assessment tools in pastures, and as a tool for applying agrochemicals in real-time. As such, I thought it prudent to take a little trip down memory lane as it pertains to the history of AOS technology.

With respect to plant canopy assessment, AOS technology has a long history dating back over 70 years. One of the earliest active electro-optical sensors was developed by Ferté and Balp (1938). This sensor was designed to be spectrally sensitive to a plant’s carotenoid peak located at 550 nm for the intended purpose of plant detection and selective thinning. Another early active sensor was developed by Leo Marihart (1948). This particular sensor was vehicle mounted and was developed for the selective application of herbicides and fertilizers. Spectral selectivity was performed via the use of color filters for detection of plant status characteristics. Marihart had particular problems with ambient light interfering with his sensor’s spectral measurements. Coincidentally, Marihart’s patent attorney introduced him to a couple of his clients that were particularly good with electronics: William Hewett and David Packard. Working with Marihart, David Packard developed the first modulated/demodulated active sensor for plant canopy spectral measurement in the early 50s. In similar work, Palmer et al. (1969) developed a sugar beet ‘singling’ system to automatically reduce plant populations. This instrument incorporated four optically modulated sensors connected to a PDP-8 minicomputer mounted to a tractor/mower. The minicomputer was programmed to create a 2-dimensional “kill map” of plants to be thinned. When a plant to be thinned was detected, the system would respond by spraying the plant with an herbicide. During the time period spanning from 1975 to 2002, fully solid-state plant status and weed sensors were developed. These sensors utilized LED’s to actively illuminate plant canopies in order to overcome the limitations of lamp-based and passive illumination methods. Henderson and Grafton (1975) developed the first AOS instrument to use LED’s as an illumination source. The instrument was designed to be mobile with an intended use to measure leaf reflectance characteristics and relate this reflectance to plant health and status. Stafford et al. (1989) developed a portable handheld sensor to measure turf moisture content. This instrument contained two near infrared (NIR) monochromatic LED’s with one LED source emitting 940 nm light and the other 1150 nm light. Subsequently, Beck and Vyse (1992) developed a weed sensor incorporating two LED light sources with one LED source emitting 670 nm light and the other 750 nm light (WeedSeeker by Patchen, Ukiah, CA). Another example is the ‘Hanna Radiometer’ which utilized 12V halogen lamp and filtered detectors enclosed in an inverted black plastic cover to exclude ambient light (Hanna et al. 1999). The instrument was essentially a variation of the work by Kinter and Beck (1998) in that it utilized a light source monitoring methodology that ratiometrically stabilized the variation in the instruments LED light source radiance. Künnemeyer et al. (2001) tested a sensor that used eight LEDs each with a different peak wavelength, namely 436, 519, 598, 654, 829, 871, 896 and 938 nm. Of the eight wavelengths used, the combination of 598 nm and 896 nm (approximately equivalent to the Amber and NIR wavelengths) resulted in the lowest error when used to estimate the herbage mass of a ryegrass pasture (Lolium perenne). Paap et al. (2008) evaluated three laser diodes (635 nm, 670 nm and 785 nm) to illuminate leaf targets in an attempt to develop a line-scan imaging sensor to discriminate weeds against a bare soil background. The multi-wavelength approach allowed them to calculate the slopes between the three wavelengths, although ultimately only the NDVI was used as the basis to discriminate between green leaves and bare soil. Unlike the previous workers, Holland et al. (2004) developed a plant biomass sensor utilizing a novel polychromatic LED light source. This sensor technology utilized the multispectral emission characteristics of certain LED devices to simultaneously measure visible and NIR reflectance from an object whilst using a single source, hence reducing the errors associated with the drift in irradiance of each wavelength. In 2017, Holland Scientific will launch two more AOS devices – stayed tuned…announcements coming soon.

Login to Holland Scientific
Reset Password
Enter the username or e-mail you used in your profile. A password reset link will be sent to you by email.